The Transformative Adventures of Ron English

The Transformative Adventures of Ron English

New Yorker Ron English is a master of the Art of Popaganda. Father of Agit-Pop and an illustrious ‘billboard liberator’, the man is an esteemed social revolutionary as much as he is one of the most iconic artists of our time. Originally hijacking urban billboards with his paintings to hold impromptu rush-hour art exhibitions in the early ‘80s, Ron’s guerrilla art tactics evolved to broadcast a message of a more contentious nature, waging what has become an almost three-decade war against advertising.

The iconic ‘subvertisements’ of artist Ron English attack monopolists of public space who shamelessly use deception to sell, challenging everything from commercial to political institutions. Ron usurps the visual codes they employ and turns their carefully constructed propaganda into his own elucidative art form that he’s dubbed ‘popaganda’. Incorporating imagery rampant in the contemporary experience, Ron seeks to redraft interpretations of history and conceptions of modern life. And in turning the status quo on its head he offers an alternative universe where nothing is sacred and absolutely everything is answerable to a little interrogation. Sarah Jayne Fell chats to him in a little interrogation of her own. 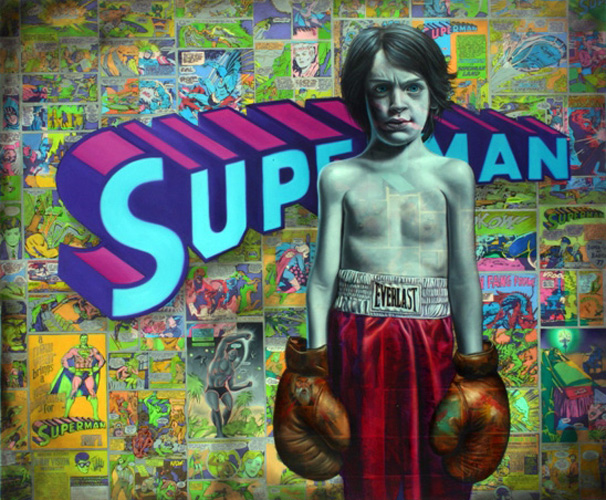 How do you go about creating your art?

First I have an idea. Then I devise a strategy to realise the idea. I ask myself certain questions. What is the best medium to express the concept? Who is the intended audience? What is the best vehicle to transmit the concept? A painting, a billboard? A lot of time is spent in the process. I may build models and do lighting effects to help myself discover the image. I may build up layers on the canvas, pushing and pulling until the image balances out for me. I have also developed a cast of culturally loaded characters to act as visual verbiage for the art. I want my art to function not only as individual pieces but as a total vision.

In an interview with Artasty you said, “I wanted to be a revolutionary but being an artist seemed easier.” How serious was this statement?

I never wanted to be a Sunday afternoon easel painter or weekend revolutionary; real art and real revolution begins on Monday morning. My driving motivation is the evolution of thought and I think art, in its various manifestations, is the way this is accomplished.

How dependent is your choice of medium on your ‘message’? Given the way the status quo is moulded by mass media, do you feel it is only possible to provoke a reaction using the same approach?

The medium has to harmonise with the message to be effective. The media is the de facto conduit of our collective consciousness and sometimes alternative messages have to be crafted to fit into its cookie-cutter fabric; it’s something you have to work with, but there is always the more basic and direct media of the streets, where concepts don’t have to be castrated to get their day in court.

The motif of iconography stands out most strongly as a unifying thread running through your work. What is an icon to you, and how would you explain its significance to your work?

Standing outside any particular religious belief system gives me a somewhat unique perspective on icons.

I don’t differentiate between religious and cultural icons as they appear to fill the same needs in people.

Sometimes I think people have a parasitical displacement relationship with icons. They use them as decoys for their own egos and agendas; I use them more as cultural touchstones in defiance of their original intentions.

I learnt you’ve recently realised your goal of having more songs written about you than any other person in history. This achievement would make you something of an icon. Is this the underlying aspiration?

Yes, I am the living person with the most songs written about them. It was Saddam Hussein who was the living person with the most songs about him in 1992, most written at gunpoint, and I thought it would be fun to beat his record. I’m glad this was accomplished by out-songing him while he was alive and not by his demise. That would feel like cheating. I don’t know if there is any such thing as an iconic iconoclast but if there is I’m a pretty good candidate.

Do you think that repeated representation in popular culture today is synonymous with being ‘iconic’?

I don’t know if repeated exposure is the sole factor in the creation of an icon. The candidate for icon status also has to embody a culturally desired idea or ideal.

As you say, you’ve been branded an iconoclast – a destroyer of icons. Would you agree with this view and, if so, is this attack on the icon intentional or just part and parcel of disagreeing with the status quo?

I think it’s all more of a transformative adventure, rather than destroying icons, I repurpose icons. The meaning surrounding anything is always in flux.

How do you perceive the evolution of your art as a body of work?

I think the longer I continue on, the more the whole vision pulls together and makes itself apparent. I am not an easy artist for the short of attention span.

With a little retrospect, do you still think being an artist is easier?